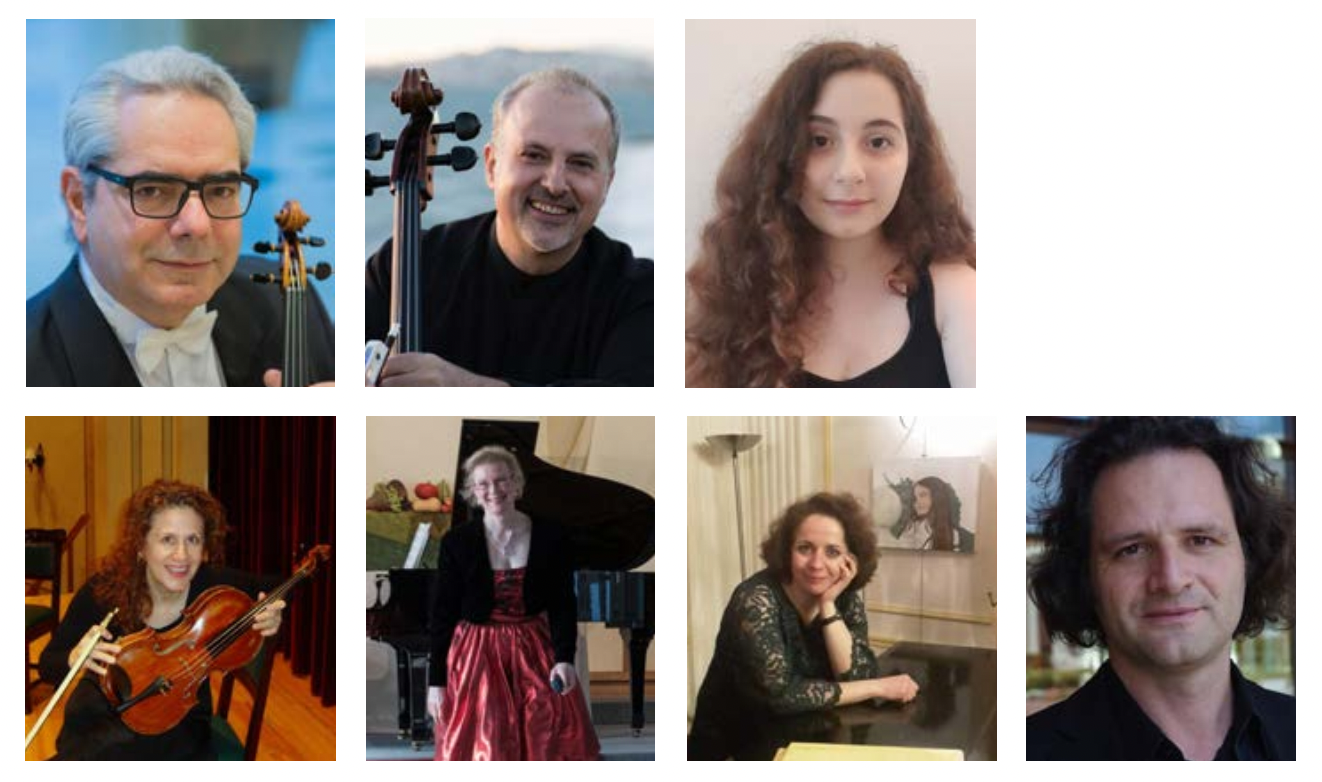 The first part of the concert commences with the unpretentiously charming early Sonata for piano and violin no. 24, K. 376 of W.A. Mozart, followed by the Piano Concerto no. 11 (here accompanied by string quartet) of J. Haydn, with its distinctive galant style and the famous Rondo all’Ungarese last movement. Part two begins with another sample of Mozart’s charmingly simple youthful writing, the Piano Trio no. 1, while the concert ends with the Greek premiere of Bohemian L. Kozeluch’s rarely played Piano Concerto for 4 hands!

Dimitris Semsis begun learning the violin with his father Mihalis Semsis. He continued on with Tibor Varga, Otto Buchner and Alexander Pavlovich. He holds a degree from the Royal College of London. He has been a member of the Bach Orchestra in Munich. He has been a concertmaster of the Greek Camerata, the Camerata – Friends of Music Orchestra and the National Radio Orchestra. He holds the same position at the Athens State Orchestra. He has appeared as a soloist both in Greece and abroad.

Lindita Nina started her music studies on the violin at the age of 6. She obtained her violin diploma from the “Academy of Fine Arts” in Tirana in 1987 and her viola diploma in 2011. From 1993 onwards she settled permanently in Greece, where she initially worked as a member of “Athenaeum”’s Baroque Orchestra (1993-1997), and of the Athens Chamber Opera Orchestra. She was first violist in the “Feminarte” Chamber Music Orchestra (2001-2002) and also a member of the “Orchestra of Colors” (2001-2012). From 1997 to 2014 she served as violin and viola teacher at the Municipal Conservatory of Lamia. From June 2014 until today she is a member of the ERT National Symphony Orchestra (principal second viola).

Kalliopi Rigou was born in Athens in 2003. She is a senior class violin student at “Orfeio” Conservatory (class of D. Semsis). She studies piano and advanced music theory (class V. Gravani). For eight consecutive years she participated in the Camerata Youth Orchestra, with which she collaborated as a soloist. She has attended masterclasses with Daniel Blumenthal, Thibault Vieux and Ariadne Daskalakis.

The Belgian pianist Joëlle Vanopbroeke was born in Brussels and commenced her piano studies at the age of eight. In 1981, she won 2nd prize of the “Dexia Bank’s Axion Classics” competition. She studied with Jacques Genty at the Royal Music Conservatory in Brussels, earning a «diplome superieur». She taught piano at the Music Academy in La Hulpe and was acting director for several years of the same academy following the decease of its director Jules Bastin. In 1990, she met Daniel Blumenthal and perfected with him for several years. She gives regular recitals as a soloist, in chamber music groups or with orchestras. Her playing is characterised by «poetic phrasing, faithfulness to the wishes of the composer and by a rare tonal beauty».

Dimitra Mantzouratou studied initially with Anastasia Kounalaki. She obtained her piano diploma under Betty Gaitanou, with Top Honors, First Prize and a Gold Medal of Excellence. She studied Musicology at the Department of Musical Studies in Athens, also holding a doctorate from the same Department. She obtained a State Scholarship to study in Belgium with Daniel Blumenthal. She has given numerous performances in Greece and abroad. She teaches piano at the Music School in Ilion, Athens.

Grigorios Zamparas is a professor of piano at Tampa University (USA) and has received a plethora of reviews praising his piano recitals, chamber music concerts as well as his appearances as a soloist with various orchestras in Greece, Bulgaria, Czech Republic, Russia, Latin America, South Korea and the United States. He studied with Yorgos Manessis and since 1991 he has been a permanent performer and visiting artist at the Porto Heli International Festival, where he has presented more than 200 works. He has recorded Anton Rubinstein’s Five Piano Concertos for “Centaur Records”. He is also a Yamaha Artist.